Despite our best efforts, will demand drive health care expenditures to new heights?

President Obama signed the Affordable Care Act (ACA) into law on March 23, 2010. Since then, the health care industry has focused its attention and energies on the supply side of the health care economic equation (e.g., where care is provided, by whom, how its reimbursed).  We should pay greater attention to the demand side of the equation (who needs what types of care, how much).  As I will illustrate, several immutable factors will lead to explosive growth in demand that could extend for decades. Unless we understand these forces, our efforts to better manage the supply side will be inadequate.

I will address three of these immutable forces:

Clearly, industry participants have undertaken myriad efforts over the years to contain health care cost increases.  Value-based payments, high deductible health plans (HDHPs), accountable care organizations (ACOs), as well as organizational-level business model changes, product standardization, mergers, etc., have been designed to lower the rate of expenditure growth. Proponents sold ACA’s passage on the promise of “bending the curve” of growth in health care costs.  These same proponents argue that the relatively low annual expenditure increases since 2008 (at least by historical standards) are prima facie evidence of the success of these efforts.

However, research conducted jointly by the Henry J. Kaiser Family Foundation and Altarum Institute’s Center for Sustainable Health Spending suggests that these efforts may only have minimally contributed, at best, to slowing the rate of annual increase in health care costs (Kaiser, April 22, 2013).  Kaiser and Altarum studied health expenditure data for the period 1965 to 2012, available via the Office of the Actuary in the Centers for Medicare and Medicaid Services.  Despite literally decades of industry-wide, regulatory and organization-specific cost containment efforts,
Kaiser and Altarum researchers found that fully 85% of the variation in health care expenditures could be “explained” by just two factors:
·


Perhaps our efforts have not bent the cost curve. From the Kaiser analysis, we can conclude that the now 7-year slowdown in health care expenditures resulted from the economic recession of 2007 and slow subsequent recovery, along with on-going Federal Reserve efforts to control inflation. The industry’s cost containment efforts, by extension, seem to have had limited impact on slowing the long-term rate of expenditure growth. Drawing on Kaiser and Altarum’s research, health expenditure growth will likely accelerate, once more robust recovery occurs, and inflation returns to historical levels.
“Uber-“aging of the population

Look, we all know the impact of an aging population, as baby boomers reach the age of Medicare eligibility.  Or do we?

We understand that persons over 65 years of age use substantially more health care services than the non-elderly – about 2- 3x as much (Health Affairs, January 1993). About 11,000 persons become eligible for Medicare every day (per former HHS Secretary Kathleen Sebelius, cited in cbsnews.com, June, 2012); and the U.S Census Bureau projects 28 million more senior citizens in 2030 than in 2014,  These aging baby boomers represent a significant tailwind for increased health care expenditures for the foreseeable future.  Yet, that doesn’t tell the full story…

The oldest baby boomer is “only” 69 years old; the youngest, 51. Here’s where the challenge becomes even more apparent:  According to another analysis conducted by the Henry J. Kaiser Family Foundation (Kaiser, January, 2015), traditional Medicare spending per capita rises with every year of age, peaking at age 96.  Indeed, per capita spending at age 96 is nearly 3x what it is at age 65! 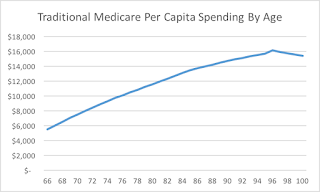 So, while baby boomers are attaining the age of Medicare-eligibility, we are only at the front-end of the curve of increased use rates by age cohort.  We can expect that aging combined with the increased use rates among the very old, will serve as a tailwind on health care expenditures until the wave of these baby boomers are well into their senior years (another 3 ½ decades for the median age boomer).

Ticking time bomb of chronic conditions among these elderly

Obesity, hypertension, diabetes, high blood pressure, heart disease, heart failure, high cholesterol -   chronic health conditions are reaching epidemic levels in the U.S.  This is a particular issue among the elderly and is a notable contributor to the health care cost challenge cited above. Again, we may only be seeing the beginning of a long-term increase in demand for health care, particularly from chronic conditions among the elderly. 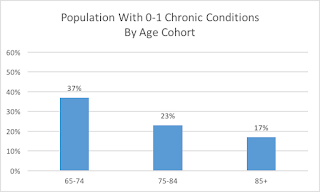 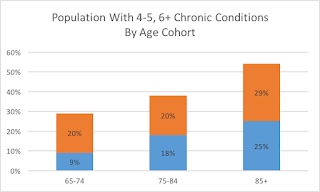 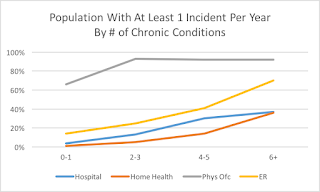 The telling indicator is how number of chronic conditions effects per capita spending among Medicare fee for service beneficiaries: average annual spending for persons with 0-1 conditions was $2,025; for 2-3 conditions, $5,698; for 4-5 conditions, $12,174; and, for 6 or more conditions, $32,658! 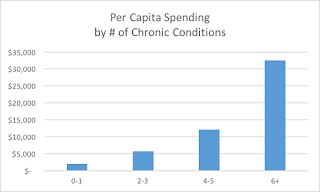 Summary
We may be experiencing just the beginning of a sustained – decades-long – period of accelerating demand for health care services. It will be ignited by a long-anticipated economic recovery and an inevitable return to inflation.  It will be fueled by an aging group of baby boomers, with increasing incidence of multiple chronic conditions. The health care industry can anticipate a greater increase in the demand for services than we have experienced since Medicare and Medicaid were introduced in the 1960s. Are we prepared? Are the regulatory and payment mechanisms in place to address this demand without bankrupting the country?  Are companies’ business models in tune with the nature of the demand, especially in the treatment of chronic conditions v. the current emphasis on acute care?

Posted by Health Industry Advisor, LLC. at 7:12 AM