How Are Healthcare Organizations Faring Under the Affordable Care Act?

Biotechnology, Health Plans and Pharmaceutical Retailers Faring Better Than Others Under the Affordable Care Act; Medical Care Providers – Not So Much

Its been 5 years since President Obama signed the Patient Protection and Affordable Care Act (PPACA or, ACA) into law. The law promised significant changes in the landscape, with “sacrifices” expected from each sector, in the interest of funding the expansion of coverage to previously-uninsured Americans. In the intervening years, healthcare organizations have been moving rapidly to redefine their business models to survive and prosper in the post-ACA world. We now have an idea of which sectors have gained the most, and which have struggled.

Arguments for these provisions included the concept of shared sacrifice, as well as an expectation that expanded health coverage would increase the demand for products and services across each of these sectors.

So, in the intervening 5 years, which sectors have fared best?  To answer this question, we studied financial data from 150 public-traded health care organizations, from across ten sectors. In particular, we reviewed each company’s Total Return[1] during the period 2011-2015 (“ACA”), as well as a comparable 5-year period (2006-2010) immediately preceding ACA passage (“pre-ACA”). We considered this, sector-by-sector, from three perspectives:
From these perspectives, Biotechnology has been the clear performance leader.  This sector reported the highest median Total Return under ACA and second highest pre-ACA, as well as the strongest improvement from pre-ACA to ACA. Conversely, Medical Care (providers) do not appear to have benefited from ACA. This sector reported the weakest median Total Return performance since ACA, following the third-worst reported performance pre-ACA. 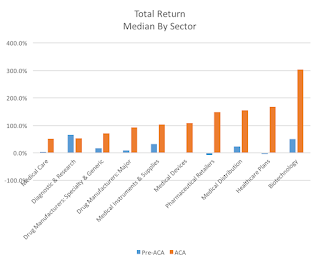 Healthcare Plans showed a significant benefit from ACA:  this sector enjoyed the second-best performance during the period under ACA, after experiencing the second-lowest performance during pre-ACA. Pharmaceutical Retailers similarly showed relatively strong performance since ACA, following negative median Total Return pre-ACA.  Clearly, these organizations are faring much better since ACA was enacted and their business models appear well-suited to the new health care delivery system.

Surprisingly, Drug Manufacturers, both Major and Specialty & Generic, have not experienced outsized performance since ACA nor have they disproportionately improved from pre-ACA to ACA.  This seems to run counter to the prevalent concerns about profiteering and rising drug costs and their impact on overall health spending.

Notably, all sectors showed improvement from pre-ACA to ACA. Whether this means they are better off under ACA is debatable, however, as the earlier period included the economic recession of 2007 and subsequent slow recovery.

So, what does all this mean going forward? Clearly, Biotechnology companies and Pharmaceutical Retailers have been well-positioned to promote and benefit from the shift in health care delivery and financing.  Health plans have gained from the increased number of Americans with access to insurance.  Yet, providers (hospitals, physicians) continue to struggle with lower reimbursement and the shift away from acute care.  Medical devices manufacturers similarly have been impacted by lower-than expected demand, as well as the medical device tax (since suspended).

Some of these effects could be mitigated, however, should utilization rebound to pre-ACA (and pre-recession) levels.  Some analysts, including the Centers for Medicare & Medicaid Services, project higher utilization as more Americans gain insurance coverage and as the US economy continues to recover from the recession. If these projections hold true, Medical Care providers and Device manufacturers might (finally) enjoy the increased demand that was “promised” with ACA passage. Conversely, this would increase the cost of business for Health Plans. (Note, for further discussion of factors which might increase utilization, please refer to my earlier blog, Despite our best efforts, will demand drive health care expenditures to new heights?)

[1] Total Return and sector definitions, and all data sourced from ycharts.com
Posted by Health Industry Advisor, LLC. at 1:19 PM