Each of us has been looking for that glimmer (the proverbial “light at the end of the tunnel”) that we are getting closer to containing and then recovering from this virus pandemic. Well, this past week brought some encouraging signs.
A leading indicator of a coming peak in active coronavirus cases is when cases cease to grow exponentially.  That indicator was evident in both China and South Korea - on February 8 and March 4, respectively - and their active cases peaked shortly thereafter.
Now, we have evidence of this occurring in Switzerland too -  about a week prior to its peak in active cases on March 29.
Look at the log-log plot of case growth for Switzerland. Note how recent points have clearly dropped below the exponential trend line: 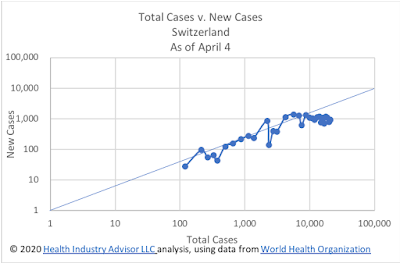 Now, look at similar plots for Austria and Italy: