On the day following Donald Trump’s surprise election as President of the United States, HCA - the nation’s largest healthcare operator, lost $2.9 billion in market capitalization. Indeed, this surprising election result, and its implications for the future of the health care delivery model, has turned the financial markets view of the healthcare industry upside down. Given the level of uncertainty, companies across the healthcare spectrum are, or should be revisiting their strategies and engaging in thoughtful scenario planning exercises.

An anticipated Hillary Clinton election, particularly if bolstered by a Democratic takeover of the Senate, and perhaps the House of Representatives, seemed to have the industry on course toward a single-payer healthcare financing system. Universal coverage for all Americans (cost be damned?) was in the Democrats’ sights. Business plans for companies engaged in healthcare were geared for such a future.

This election launched an unexpected 180o turn in the direction of the industry. “Repeal and Replace”, long touted by the Republicans, now seems likely. But, what does that mean for providers, payers, drug and device manufacturers?

Wall Street despises uncertainty. In the case of this sudden change of direction of an industry, the Street responded with force. Stocks of health care providers were hammered: In a single day, Tenet shares fell 25.0%; Community Health Systems, 21.5%; Lifepoint Health, 13.5%; and HCA, 10.8%.

Since that initial, impulse reaction, a slightly different picture has emerged: While the market capitalization of providers remains depressed from pre-election levels, drug manufacturers and medical device companies’ shares have taken a hit. Conversely, insurance companies are fared quite well, as the market interprets the implication of Trump’s proposed nomination of Dr. Tom Price as Secretary of Health & Human Services.

Clearly, the market has expressed its collective opinion that the election foretells a significant shift in the direction of the industry. Yet, tremendous uncertainty remains, both about the degree and the timing of any efforts to modify the Affordable Care Act (“Obamacare”). This uncertainty means that, while business plans and strategies developed pre-election must be re-visited, the path forward is cloudy. Will value-based care initiatives be retained? Will improvements in uninsured rates be sustained? Will the ‘cost curve’ be brought under control? Will the individual mandate stay in place? Will these changes take place in a methodical manner or, a chaotic one?

These questions and dozens more will profoundly affect strategies of every company in the industry. With so much uncertainty, do leaders simply sit back and wait? Or, do they initiate robust scenario planning effects, in preparation for whatever may transpire? 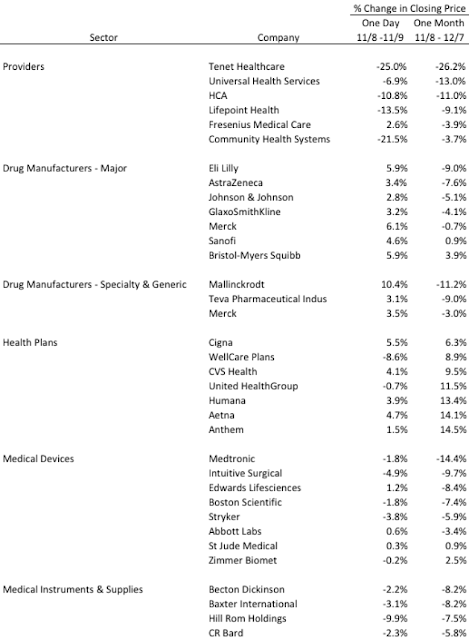 Posted by Health Industry Advisor, LLC. at 9:33 AM